Dear Gantt, its time we had a talk

I found someone else, so I'm breaking up with you. 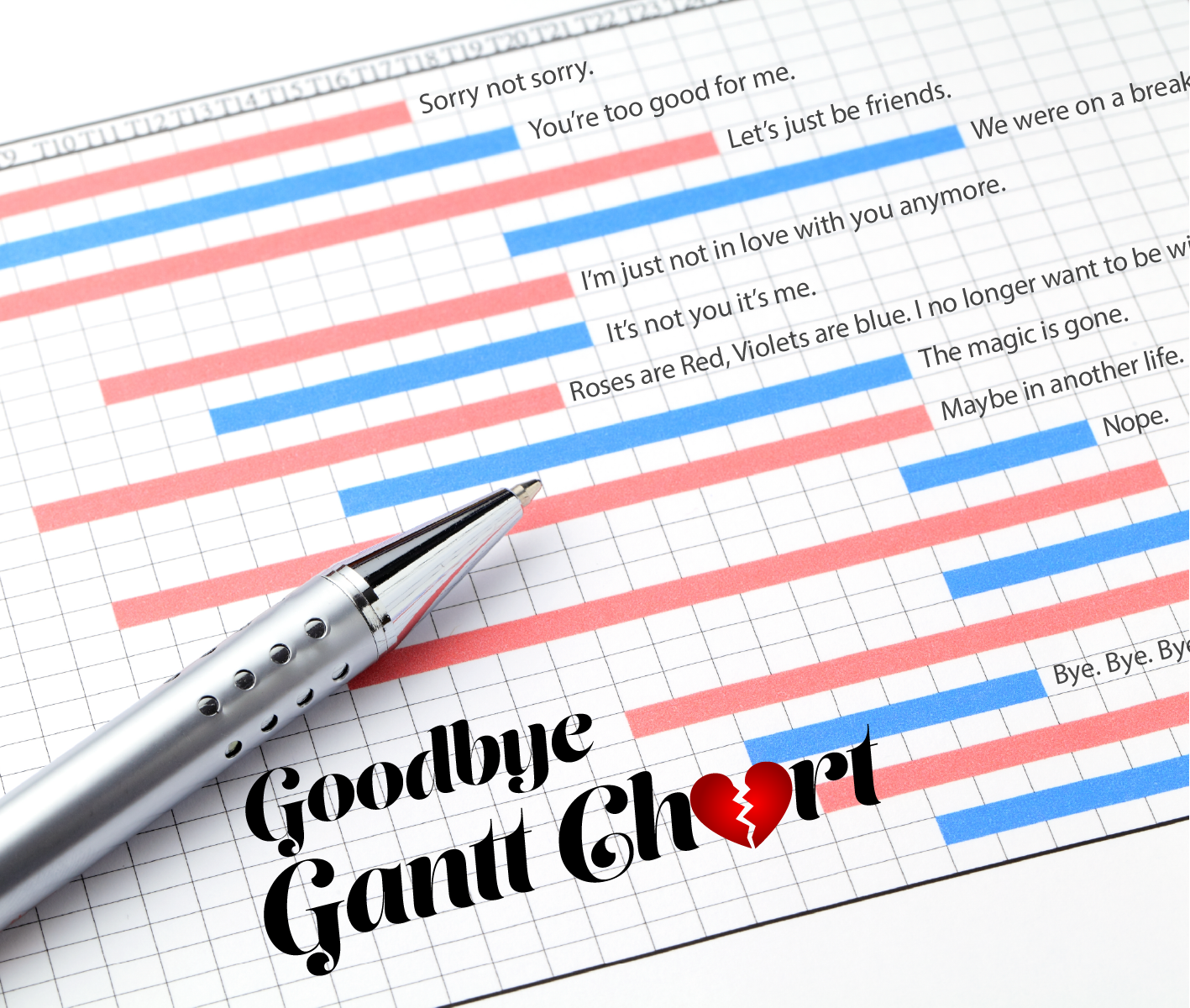 I think its finally time that maybe we stopped seeing each other. We had a great run, Gantt charts and humans have been together for decades. They, along with the software that creates them (i.e. Microsoft Project, Primavera, etc), are really powerful, and smart, and just all around great. There’s a reason the Gantt Chart has been the standard for Project Management for close to 100 years.

But look Gantt… it’s not you, it’s me… really. Remember that project we had in 2010 with P6 that had 12,000 activities, you made me look really good. You printed a 120 page report, with smart Task IDs, and when I passed that report to the executives and PMs they immediately had trust, I could tell because they glanced at the report for about 90 seconds and then said “looks good to me”. In reality, we all knew that only I could understand you, I know that’s not enough reason to break up, but it’s just part of the problem.

In 2013, we tried something a little different, I got some technology that let me tie you to the BIM… Let me tell you something, tying you to the BIM was a very exciting time, I thought it would save our marriage. Tying the P6 to the BIM allowed me to really get to know all our projects and see things so clearly, the logic in our schedules became air-tight, and don’t tell this to anyone but now I’m scared to schedule without BIM.

we were finally going to change the industry

Tying you to the BIM also solved, I thought, a big problem we had: A new project we got, twice the size of the one from 2010, but this time no 200+ page report. This time there would be a video… 3D + time = 4D. It was like renewing our vows, we once again shined, and everyone was so happy for us and we were finally going to change the industry... Or so I thought… really it just made me a better scheduler. I think I was just lying to myself when I thought a video or a 4D model was a fantastic addition to a Gantt. I think I stated to see what was really missing in 2017.

In 2017 I switched companies. Equipped with the Gantt and the BIM I was ready to save another company from themselves. This company, after all, had but one other scheduler, and all their projects had outsourced their scheduling to consultants. This would be easy.

After a few weeks on the job, I realized that none of those projects had a Gantt chart… that’s weird… Gantt charts are the industry standard and then this company is using something completely different. When I first put my eyes on her I was taken slightly aback. She looked nothing like you… I mean she had bars, those were activities and diamonds for milestones, but there were no start/finish dates, no duration column, no Activity IDs. Heck there were barely any relational links. She was a chart, created by a Superintendent in Visio, with ZERO intelligence: she had no logic, she was wrong quite often, and let me tell you…progress updates… took days!

Equipped with the Gantt and the BIM I was ready to save another company from themselves.

Immediately, I dismissed her. Because she had no logic and no intelligence, she was worthless, she couldn’t compare to you, not even close. I couldn’t even tie her to the BIM! When someone sent me a copy of her, I would immediately, painstakingly, manually convert her to you… my one true love.

I was doing pretty good for a few months..months... I managed to convert 2 of our big jobs from this “dumb schedule” to a really sharp 4D Gantt, I mean the hours we put in to convert this dumb, zero intelligence schedule that the Superintendent, 4 of the subs’ superintendents, and 2 project engineers spent hours creating…was well worth it, right? I mean, it took just as much effort to convert, but now we had a smart schedule and it was tied to the BIM. I had another project, just as big. Where we scheduled with you from the very beginning with 4D Gantt. Thing were going well.

Then 9 months ago, everything changed. Almost all my projects that were using 4D Gantt were going back to the dumb schedule… how? What did I do wrong? Was it my fault? I didn’t understand. That’s when I knew time was running out on our relationship.

there are really good Project Managers out there, and really good schedulers… but they’re not the same people.

See, it’s true what they say, beauty is on the inside, and that’s why I love you… you’re so smart, and you adapt, if I mess up you can quickly help me make changes, and you make me look really smart again, and like I did my homework with those really long reports. But this relationship isn’t about just me. See, there are really good Project Managers out there, and really good schedulers… but they’re not the same people. I’m a really good scheduler, but I’m not a project manager. Those reports we print, I can’t even read them, so why would I expect a PM to? I surely can’t expect a superintendent or even a foreman to read a Gantt chart? What was I thinking?

I’ve decided that I’m gonna go dumb… well not really dumb. But those TimeTables that the superintendents were using, they display more information on less paperpaper, and anyone can understand them. So ya, the reason I’ve been coming home late from work the last 9 months is because I’ve been working on making those TimeTables smart. We can easily take schedule data from Primavera or Project and put them in a TimeTable that is so easy to read. Rescheduling doesn’t take hours like it did when I was first introduced to TimeTable. So, I’m sorry but I’m sharing TimeTable with everyone and I don’t know how confident I am about our relationship anymore.

TimeTable is a tool for schedulers and project managers alike that converts your gantt charts into a format that anyone can read and understand. 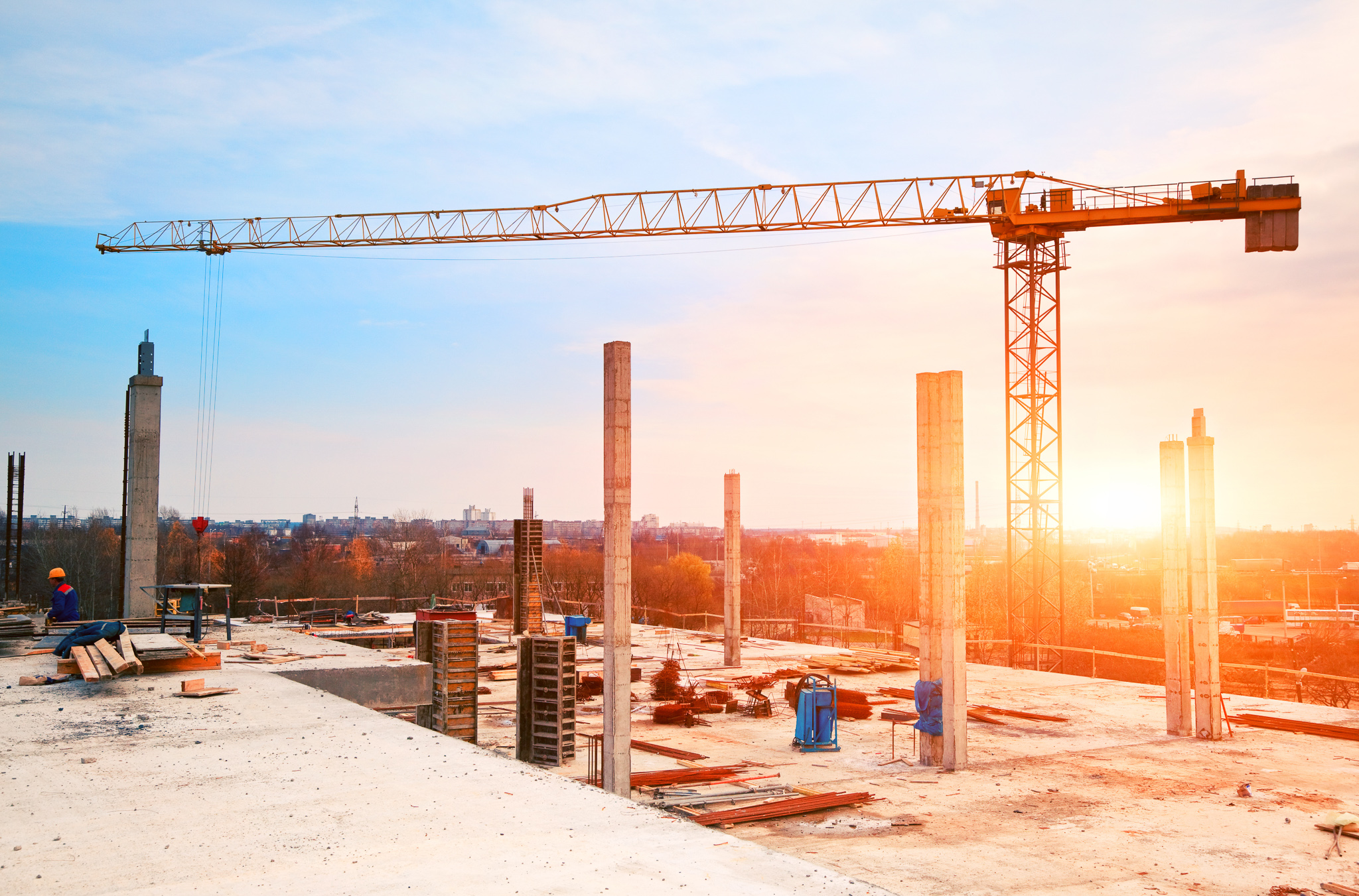 The final stage: Taking matters into my own hands.

Dear Gantt, its time we had a talk

I found someone else, so I'm breaking up with you. 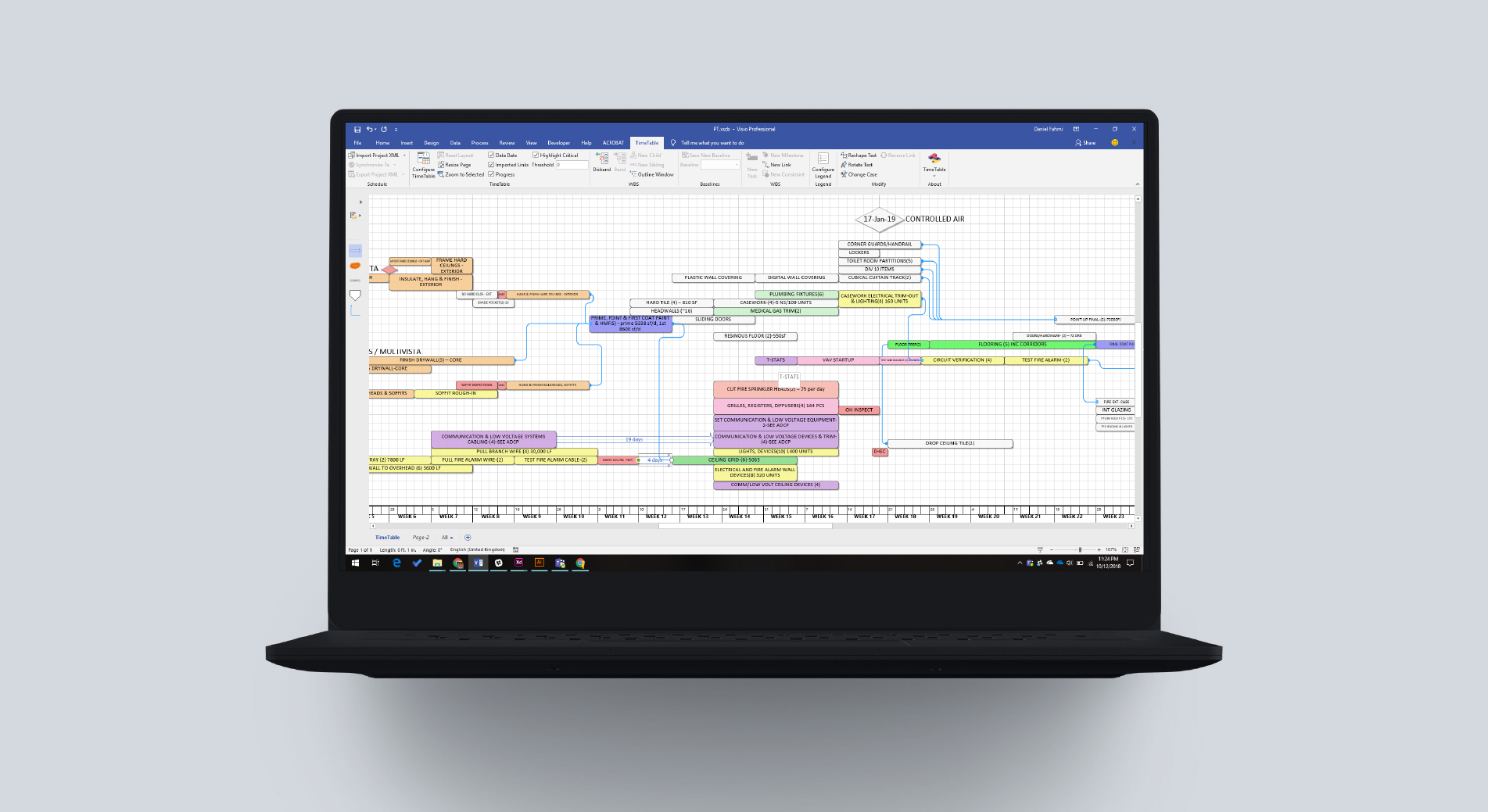 How Robins & Morton got better with TimeTable